“The Market Facilitation Index (MFI)  is a measure of the market’s willingness to move the price. I cannot overemphasize the value of this indicator. It is a more truthful measure of market action than any stochastic, RSI (Relative Strength Index) or other momentum indicator.”

and allows to evaluate the efficiency of the market price movement.

What does efficiency means here? An efficient market is seen as liquid and active market where all types of investors (long-term and short-term traders) are actively involved in buying & selling. Should the interest of one large group of investors vaporize, the volume drops and from that point efficiency of the market goes down as well.

MFI can be used for all time frames from 5 minutes up to daily and weekly frames.
Current BW MFI has been coded for MetaTrader 4 platform, however, other trading platforms might also have this indicator among trading tools.

If not available, you can download the same indicator here:

and place it in your installed MT4 folder inside /Experts/Indicators. 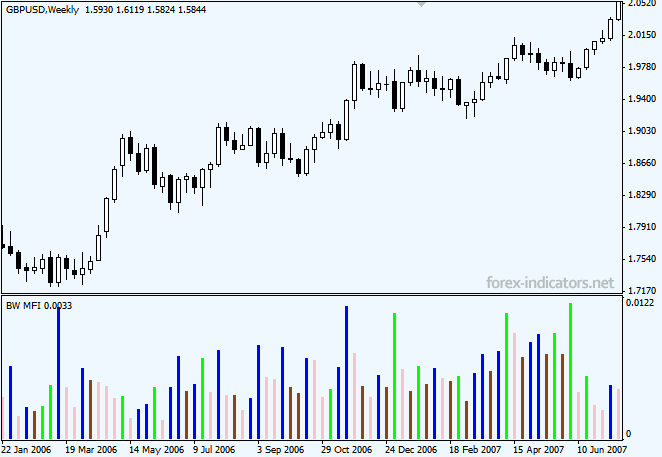 With BW MFI we don’t analyze absolute values of the indicator (be it 0.0030 or 0.0055), but rather focus on changes of price at any single moment.

To ease the task of evaluating those changes, in MT4 we have MFI bars colored in 4 distinctive colors: 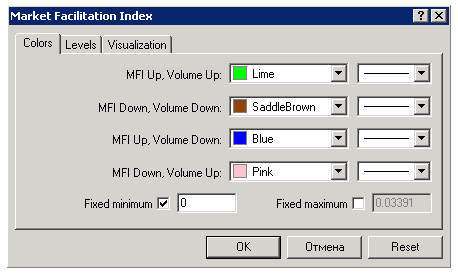 All that’s left to do is to know how to read and interpret different colors given by MFI indicator.

There are 4 possible combinations of MFI and Volume relationship, which are colored in BW MFI indicator with the following message to send:

Green MFI bar tells that the market is already on the move. Therefore, traders’ best immediate reaction should be to go with the market, whatever direction it is heading.

On such green day you would already want to have an open trade in the direction of the market move.

If there were any trades left open, make sure they are not going against the market, otherwise they risk to bring losses. A Green MFI signifies three things:

Brown MFI bar (called Fade) appears when market starts to fade – lose interest in advancing further. Often this can be observed at the end of a trend. Traders who used to actively participate in the market are no longer interested in establishing new positions at current price, which causes the market to fade (both volume and MFI decrease). Bill Williams brings as an example Elliott waves, where the fist Elliott wave in the sequence has a fade top – little action is happening, and the excitement of the market is dwindling.  Yet, he says later, that boredom often precedes the beginning of a big move. “So the very time when the market is most boring is exactly the time when a good trader must be on guard for any sign that momentum is building” – says Bill Williams.

Several brown bars in a row can perfectly illustrate the period where fading excitement is slowly building the base for a new market move.

Blue MFI bar (called Fake) has been given its name for a reason. When market makes a progressive move, but this move is not supported by the volume (for any reason),  this provides a clue that there are probably no real interest in the move yet, while certain group of market participants is trying to control and manipulate the market to their advantage.

This is the point when newbies can be easily scared out by sudden change in the dominant trend, which will cause them to close their existing trades and attempt to run with the new trend, which to their huge disappointment will be over as fast as it began, since it was not a real move backed up by volume, it was a “fake” move, controlled by a small but strong group of large market players.

Pink MFI bar (called Squat) appears at the end of each trend. Bill Williams calls it “the strongest potential money maker” of the 4 setups. The squat bar is marked by an increasing volume yet temporary stalling price movement. The key factor is: there are many participants entering the market, all of them are enthusiastic about selling & buying (volume rises), but before the battle between buyers and sellers finds a winner, the price movement stops – market sort of squats before leaping forward. The breakout is going to be either seen as a reversal, or a continuation of a current trend. Either way, it is a good starting point to